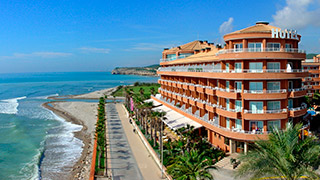 The breach of any of the general rules listed below, or of those specific for each of the tournaments, may result in the loss of a game or even in the dismiss from the Festival, as well as in the loss of any right to cash prizes or trophies, or the refund of any amount that the player could have paid (i.e. registration fee).

Chess tournaments that take place during the International Chess Festival Sunway Sitges shall be governed by these rules of play, by the Laws of Chess and by current FCE, FEDA and FIDE regulations, interpretations and supplements included.

Participation in any of the Festival tournaments implies the knowledge and tacit acceptance of these rules of play.
It will be the responsibility of each player to be assigned to the correct group of play in each of the tournaments that he or she decides to play. Also, the player must ensure that his or her details that appear in the various registration lists and rankings are correct, and should inform the Festival Organizers in the event of a mistake. If a player is found out to be not assigned to the correct group or to have provided some incorrect information deliberately, he or she will immediately be expelled from the Festival.

The winners (or both players in the event of a draw) will be responsible for communicating the results of their games to the referees. If the outcome of a game has not been notified to the referee team, both players will be considered to have lost that game. The original form is property of the organization, the players having the obligation to deliver it signed and with the correct result to the referee at the end of the game. Do not leave the sheets lying on the table.

The relocation of the pieces and board to their original position will also be responsibility of the players, once the game is finished. The elements necessary for the running of the games cannot be removed from the game halls.
Players agree to attend the game halls with proper clothes and to have a correct and sportsmanlike behavior.
Smoking neither electronic cigarettes is not allowed in game halls nor throughout the hotel premises, except for its outdoor terraces.

Entering mobile phones in the game halls is forbidden unless they are turned off and are kept off for the duration of the game. Entry into the gambling halls of any electronic device that could be used to provide some help to chess players will not be permitted. The player authorizes referees to check if the phone is off in case they have any doubt on this point.

Players may not leave the game halls without justification or permission of a referee while in their games. In particular, they cannot go to their hotel rooms or access the Analysis Room before completing their games.
The Festival Organization, consensually with referees, reserves the right to assign game rooms the way it deems most appropriate, being able to isolate any games during any round of any tournament.
The Organizers reserve the right to make some small specific modification in tournaments’ schedules, in order to improve their development. Also, under referees’ advice, the Organization may increase or decrease the number of rounds of any Festival’s tournament. Although expected to be an improbable circumstance, if any changes occur, players will be notified well in advance.

Participation in any of the tournaments of the Festival implies acceptance by the player that his or her personal details and games’ information may be published in different media that the Organization considers desirable for better publicity of the event. These means include, for example, registration lists (paper and online in different media), match results, tournament rankings, retransmissions, PGNs, photos, videos, etc.
Players are not allowed to talk to anyone during the dispute of their departure.
It is made known to all the players of the Festival that in all the tournaments there will be an anti-cheating commission that will ensure that they do not occur, and in the case of occurrence, will apply the Anti-Trap regulations of the International Federation (FIDE), for this type of infractions.

Only players with a valid federative license will be able to participate in any of the Festival’s tournaments. Players can register for tournaments through any of the following:
Filling the form you find in this website
By sending an email to info@sunwaychessfestival.com.
By calling (+34) 93 811 34 10.
By sending a fax to (+34) 93 894 14 64.
Registration for any of the Festival’s tournaments shall be valid once the registration fee is transferred to the bank account of the Festival (which will be provided when you contact us by mail, phone or fax), providing your credit/debit card details (long number and expiry date) or such fee is paid in cash (against proper receipt) to the Organization, and once the Festival’s Organization has confirmed that registration.

The Organization of the Sunway Sitges International Chess Festival reserves the right of admission and may reject any application for registration that it deems appropriate.

The tie-break system for all Festival’s tournaments will be as follows and in the following order:

Buchholz FIDE least the worse result.
Total Buchholz FIDE.
Sonnenborg-berger.
Particularly among players still tied, should they have played against each other.
Raffle in the presence of the Competition Committee.
For the purposes of calculating the Buchholz systems, the “virtual opponent” method will apply for games not played.
In the case of group A, once the previous tiebreaker systems have been applied, a provisional general classification will be available. However, if there is a tie to points between some of the first 8 classified players in that provisional classification, a match-play tiebreaker will be applied to obtain the final general classification.
This match-play tie-break will consist of an eliminatory system (e.g. quarter-finals, semifinal and final if there are 3 or 4 players tied) among the players who have finished the tournament with the same number of points (no matter if the champion must be determined or not), in the following way:

2 blitz games with a rhythm of 5 minutes + 3 seconds per play (5 ‘+ 3 «), alternating colors.
In case of a tie, a blitz game «Armaggedon», with 6 minutes for the player with white and 5 minutes for the player with black. The color of each player will be raffled and, in case of draw, the player who has played with black will win.
Disabled players can choose whether or not to play tie-breakers. In case of not doing so, they will get the prize they would have gotten in the provisional classification, without applying these tie-brakes.
Examples:

Byes:
Byes, of zero points, should be requested in writing to referees, and must contain both the bye request and the signature of the player.

If a tournament of the Festival allows applying for a bye (see rules of each of the tournaments), the bye for a particular game may be requested before the end of the previous round.

Claims:
Any claim before an arbitration decision will have to be addressed in writing to the Competition Committee. It must be done no more than 30 minutes after the end of the game in which the decision in dispute took place. In this case, the player must state to the corresponding referee of the tournament his intention to appeal so that it is taken into account and if necessary to delay the publication of pairings. From the moment of ending the game in which the event occurred, he has that time to present his writing. Once this period has passed, the claim will no longer be admitted. He will appear before the corresponding Head Referee. The Festival Competition Committee will be unique for all tournaments and its decisions will be final and unappealable. Your composition will be communicated on the bulletin boards.

This Competition Committee shall consist of the Director of the Festival and 5 players (3 holders and 2 alternates, the latter for those conflicts that involve any of the holders, or if they could not be located). During the first round of the Festival, the Organization will choose that Committee.

Decisions of the Committee shall be final and not subject to appeal.

In blitz tournaments, the decisions of the Festival’s main referee will be final and not subject to appeal.

Validity:
Slow games tournaments are eligible for ELO FIDE, FEDA and FCE, and shall be valid for obtaining international norms.

Awards:
Legal holds and taxes will be applied to each of the tournaments’ cash prizes. The specific list of prizes of each of the Sunway Sitges International Chess Festival’s tournaments is in the specific prizes’ section of this website for that tournament.

The awards ceremony will take place at the end of the tournament, between the hours indicated on the schedule found on this website. If a player is entitled to receive a prize but is not present at the time that it is awarded during the awards ceremony, he or she will lose any right to receive that prize, and will not be able to claim it later. Also, in order to collect the prize, the player will have to show an identity card or passport.

It is indispensable for the prizes for players staying at the official hotel for the Organization inform the Festival once the reservation is made condition. These players appear in the lists with a specific indication next to their name.