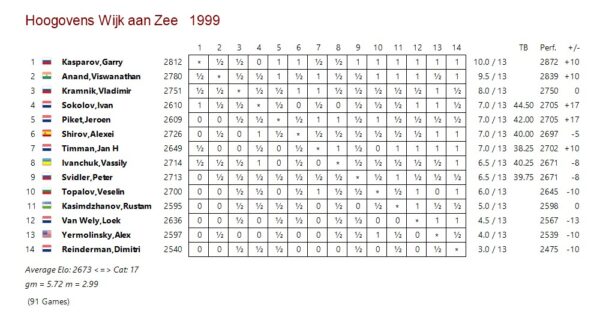 The 1999 edition was memorable for a number of reasons. It was the last time the event ran under the name “Hoogovens Tournament”, which had been used since 1968; it was Kasparov’s first-ever participation; and Kasparov won with the highest-ever score achieved when the tournament was played as a 14-player round robin (the same 10/13 score was achieved by Browne and Seirawan in 1980, by Korchnoi and Beliavsky in 1984 and by Carlsen in 2013).

Not only that. At least three players have fond memories of the event’s penultimate edition of the 20th century — Sokolov, for his victory over Kasparov; Alex Yermolinksy, who wrote a piece about his memorable win over Veselin Topalov amid a not-so-great overall performance; and Kasparov, who got to play what is now known as his ‘immortal game’.