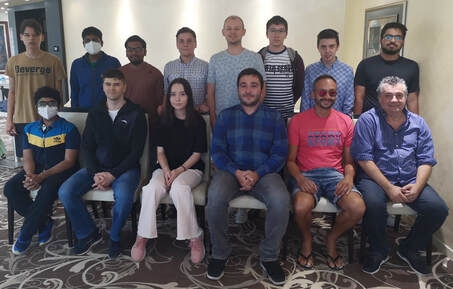 2. Tournament participants, according to sorting or drawing of lots procedure, can be seen at following links:
GM Swiss «Orbis-3 2021» http://chess-results.com/tnr554485.aspx?lan=1

4. Festival schedule is as follows:

5. Time control will be 90 minutes for 40 moves plus 15 minutes to the end, plus 30 seconds cumulative increment for
each move starting from the first move.
6. Tournaments will be played according to FIDE Laws of Chess, including changes valid from January 1st 2018.
7. Tournaments Chief Arbiter is IA Nebojša Radosavljević. Deputy Chief Arbiter is NA Svetlana Petrović. Festival Director is IO Saša Jevtić.
8. Decisions of Chief Arbiter are final.
9. If at the end of the tournament two or more players are tied for the same rank, the following tie-break methods shall be applied by order for swiss tournament: Middle Bucholz (lowest ranked player excluded), Progress, Greater number of wins and Draw, for round robin tournament: Sonneborn Berger, Direct encounter, Greater number of wins and Draw.
10. It is possible to delay or postpone any game in any round, but only if both players and Chief Arbiter agree. Being late will be tolerated till 15 minutes from the round starting scheduled time. Players who are present in the playing hall at the round starting scheduled time are obliged to be seated at their boards, otherwise will lose their games by forfeit.
Exceptions of these rules are possible in a case of force majeure and are in charge of Chief Arbiter.
11. Analyzing is not allowed in the playing hall, as long as there is a single game in progress.
12. It is strictly forbidden to use a mobile device, into the playing hall. If a player’s mobile device rings or makes any other sound in the playing venue during play, or if player has any suspicious act with mobile device, that player shall lose the game by forfeit according the Laws of Chess.
13. Players are obliged to write moves to the end of the game. Score sheet has to be filled correctly. Players are obliged to submit original form to the arbiter and to keep copy.
14. All preventive and protective measures for the suppression of infection with the COVID-19 virus prescribed by the Government of the Republic of Serbia, which will be valid during the Festival, will be applied at the Festival. All participants of the Festival are obliged to adhere to all prescribed instructions and measures and can participate in the tournament only if they do not feel any symptoms related to infections with the COVID-19 virus.
15. Accompanying persons are allowed to use cameras and other electronic devices in the playing hall only in first 5 minutes after the round starts. After that time use of cameras and other electronic devices is allowed only to
tournament officials and accompanying persons are obliged, in accordance to Article 14. of this Regulations, to leave the playing hall.
16. It is not obligatory to players to have traditiional handshake before and after the game.
17. This Regulations are prescribed by the Organizer and will be announced in the playing hall. By playing first move in first round all players will confirm that they agree whit all articles of this Regulations.
Paraćin, July 17th 2021. Youth Chess Club «Paracin»