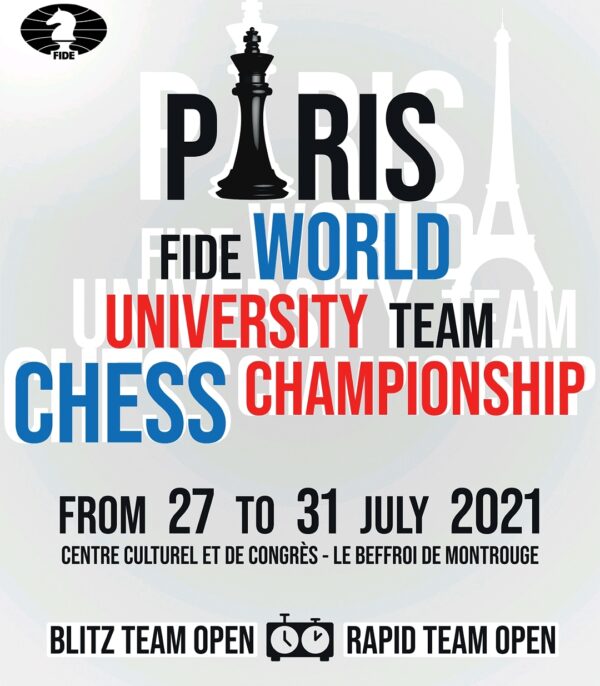 1. 2. FIDE Event Commission (EVE) is in charge for preparing Regulations. The Organizer (nominated by the FIDE Council) is in charge of the organization of the tournament and relations with the participating teams.

1. 3. The body responsible for adopting and changing these Regulations is the FIDE Council, upon recommendation by EVE.

1. 4. At any time, any circumstance or unforeseen situation not covered in these Regulations shall be referred to the FIDE President for a final decision.

2. 1. UWTC consists of two team events: Rapid Team Open and Blitz Team Open tournaments. Teams representing any University, College, Business School, and Military Academy or any institution of higher education have the right to participate. For African countries, this teams could represent a consortium of universities or even be the national university team. (“Participating team”). FIDE has the right to decline an entry that does not meet these requirements, or grant exceptions on a case-by-case basis.

2. 4 For pairing purpose, the teams will be ranked according their Elo rating rapid/blitz average. In case of no rating then classical rating will be used. Colours will be drawn at the Opening Ceremony.

a) Each team has four main players, including at least one woman.

2. 6. Each team must appoint a captain. The captain can be either a member of the team, or another person. Each team captain decides on his/her team board order. This board order cannot be changed after Participating team’s registration (see Article 3.1)

2. 7. Each Participating team captain announces his/her team composition for each match not later than 20 and 15 minutes (for the blitz) prior to the beginning of the respective match. In case of substitutions, board order (see Article 2.6) remains unchanged. In each match, each team should have at least one male player and at least one female player.

b) Any tie is decided as follows:

3. 1. Each Participating team intending to participate in UWTC confirms its participation providing the list of players with the exact boards order (see Article 2.6 through a dedicated online registration form, see hereabove) by May 30th 2021. In accordance with Article 2.5 c FIDE reserves the right to request evidence of the actual scholarship. Later registration may be refused by EVE.

3. 2 The following players/students may participate as players in the event:

– be a full-time student without any age restriction.

3. 3. When providing the players’ list, each Participating team must

– provide a certificate of study showing the date of entry into that establishment and a valid student card, including its validity date for it’s players.

– ensure that all players are aware of these Regulations and acknowledge Fair-Play rules. https://handbook.fide.com/files/handbook/ACCRegulations.pdf

3. 4. A registration fee of 250 euros is to be paid by the Participating teams to the organizer before the start of the event. This fee is non-refundable.

3. 5. In case of questions or clarifications regarding the registration process and/or UWTC organisation, Participating teams can contact FIDE at the following email address: uwtc@fide.com.

The playing schedule will be announced before the first round of each tournament.

5. 2. All players will receive certificate of participation.

6. 2. During play either the Chief Arbiter or his Deputy must be present in the playing area.

6. 4. Within one (1) week after the end of the event the Chief Arbiter submits a report in English to EVE. The report contains the result of each individual game as well as the final result of each match and also a general description of the course of the event. If there are any difficulties, conflicts or incidents, they shall be described together with the measures taken to deal with them.

7. 1. FIDE appoints the Chairman, the two (2) other members of the Appeals Committee and two reserve members, all from different University.

7. 2. A member of the Appeals Committee cannot sit in judgement in a dispute involving one (1) player from his/her University. He/she should be substituted by a Reserve member.

7. 3. All appeals and protests must be submitted in writing to the Appeals Committee not more than fifteen (15) minutes after the relevant Rapid or Blitz game, or the particular infringement complained against.

7. 4. Each protest must be accompanied by a deposit fee of two hundred (200) USD or the equivalent in local currency. If the appeal or the protest is accepted, the fee shall be returned. If the protest is rejected, the fee may be forfeited to FIDE.

7. 5. The Appeal Committee may decide on the following matters:

a) appeal against a decision by an arbiter,

b) protest against a player’s behaviour,

c) any appeal which the Committee considers relevant.

7. 6. The Committee endeavours to find binding solutions that are within the true spirit of the FIDE motto, Gens Una Sumus.

7. 7. The Committee endeavours to make a decision as quick as possible.

7. 8. The written decision of the Appeals Committee arising from any dispute in respect of these regulations is final.

7. 9. Within one (1) week after the end of the event the Chairman of the Appeals Committee submits a report in English to EVE.

8. 1. The technical meetings are held the day before the beginning of each competition.

8. 2. The team captains of Participating teams are obliged to attend the relevant Technical Meeting.

9.1 The general FIDE laws shall be applied with their supplements and interpretations as laid down by the FIDE Rules Commission.

10. Behaviour of the players

10. 1 During the whole course of the contest, the players must conduct themselves in accordance with sporting fairness and decency, and must take care neither to distract nor to trouble their opponents. They should endeavour to settle all disputes by mutual accommodation.