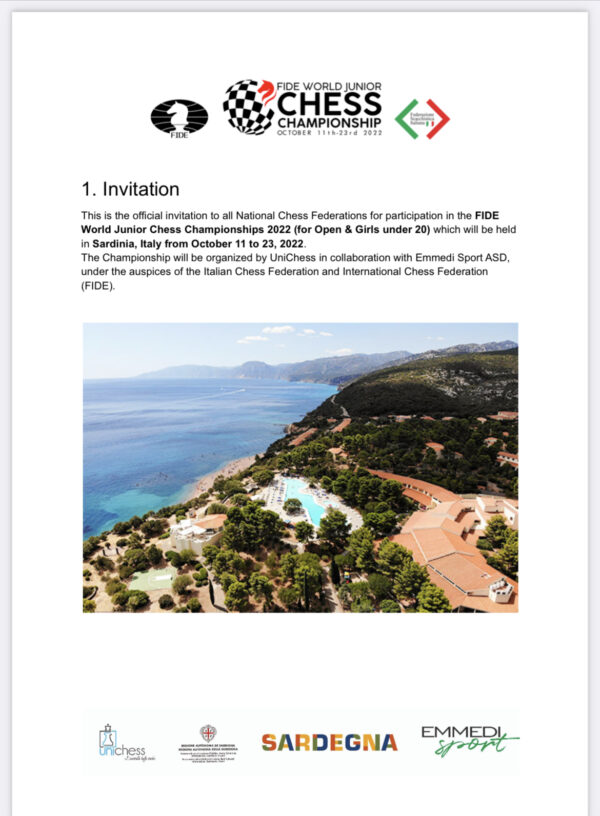 This is the official invitation to all National Chess Federations for participation in the FIDE
World Junior Chess Championships 2022 (for Open & Girls under 20) which will be held
in Sardinia, Italy from October 11 to 23, 2022.

The Championship will be organized by UniChess in collaboration with Emmedi Sport ASD,
under the auspices of the Italian Chess Federation and International Chess Federation
(FIDE).

2.1 Each National Federation can enter one (1) player born on or after 1 st January 2002 in
each of the open and girl categories, totalling a maximum of two (2) invited players.
2.2 Players with a personal right, according to FIDE rules, will also be accepted as invited
players;
Subject to age, entitled to participate are:
a. The top 3 players of the previous edition of FIDE World Junior Championships.
b. The Continental Junior Champions of the year preceding this edition. If a Continent did not
organize a Continental Junior Championship, then the Continental Under 18 Champions of
the year preceding this edition.
c. The first three players in the starting list of both the Open and Girls tournaments, using the
current rating list when the tournament starts. If two or more players have the same rating
and title, then among the tied players, the player whose rating in the preceding rating list is
higher shall receive the personal rights status, even if this is contrary to the order in which
the names appear in the starting list. If this does not break the tie, this process is repeated,
using progressively older rating lists, until the tie is broken.
d. World Youth U18 and U16 champions of the year preceding this edition
2.3 In addition to the players mentioned at 2.1 and 2.2 above, FIDE member federations
shall have the right to send additional players.
2.4 In order to ensure proper tournament standards, all invited players and all additional
(extra) players must submit their registrations through their national federations until 15th
September 2022 (registration deadline).

The registration should be sent to: fideworldjunior2022@gmail.com