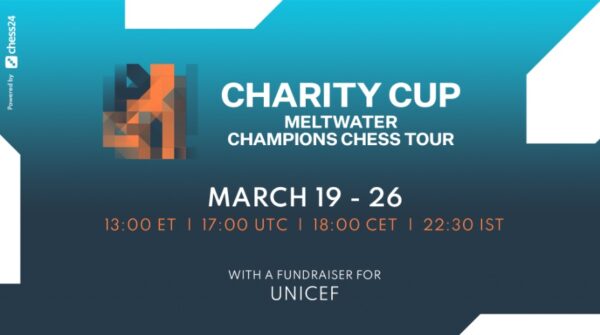 
The quarterfinals and semi-finals are 1-day, 4-game matches, while the final will feature two such matches over two days. The players have 15 minutes for all their moves, plus a 10-second increment starting from move 1. In the Prelims there are 3 points for a win and 1 for a draw. If a tiebreak is required the players will play two 5+3 games and then, if needed, a single Armageddon game, where White has 5 minutes to Black’s 4, but a draw counts as a win for Black. No draw offers are allowed before move 40.

For the 2nd event on the tour the decision was taken to focus on the humanitarian situation, by renaming the event and organising it as a fundraiser for UNICEF, the United Nations Children’s Fund, that is providing life-saving support for children and their families in and around Ukraine.

You can already donate to UNICEF using the following link:
https://www.unicef.no/stott/privat/donasjon/chess-tournament