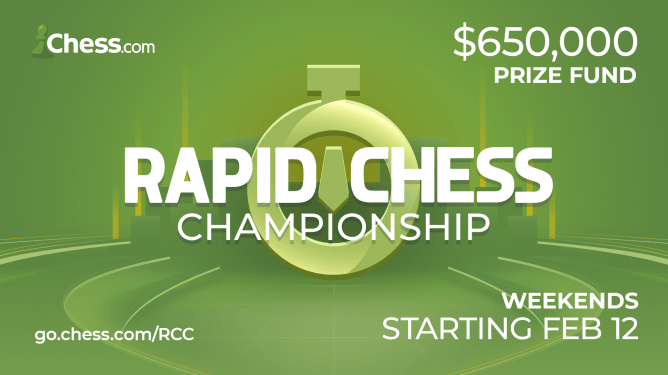 The 2022 Chess.com Rapid Chess Championship is a world-class online rapid event series for the top-100 players, top 10 women, and top 10 Juniors in the world. From February 12 until August 28, these chess stars will be able to compete in weekly Swiss and knockout events to fight for the top of the standings and their share of the $650,000 prize fund—the largest prize fund in Chess.com’s history.

Top 100 players, according to FIDE’s classical rating list
Top 10 Junior players
Top 10 women players
Any player who has been in any of the categories above from January 2021 through the current FIDE list is eligible to play.

Players accumulate Grand Prix points throughout the season according to their performance in each weekly event:

How To Play In The Event

All accounts must be labeled with the player’s real name.
All players will be required to join a Zoom call for all Swiss events
Players must have a two-camera setup for the knockout events.
Players must have the ability to share their screen upon request.
Players are allowed to stream the event with emote-only chat.