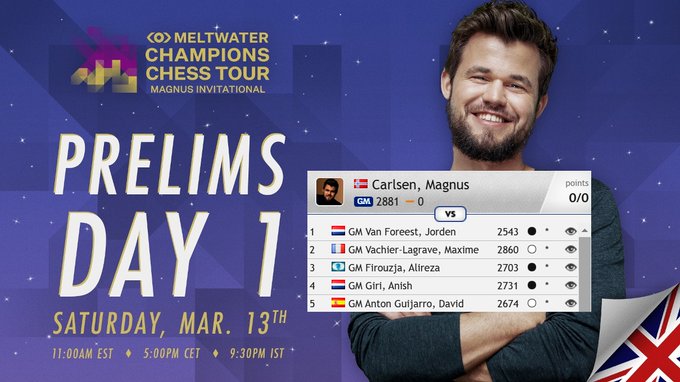 World Chess Champion Magnus Carlsen tops the field for the Magnus Carlsen Invitational, the 4th event on the Meltwater Champions Chess Tour and the 2nd Major. The 3-day preliminary stage sees the 16 players play each other once before the bottom 8 are eliminated while the top 8 advance to a knockout consisting of 2-day matches. The prize fund is $220,000, with $60,000 for top place, while the winner also qualifies to the Tour final in September. The time control is 15 minutes for all moves, with a 10-second increment per move from move 1. The knockout match-ups consist of 4-game matches on the first two days. If the match score is 1:1, two 5+3 games are then played followed, if needed, by Armageddon, where White has 5 minutes to Black’s 4 but a draw counts as a win for Black.